The Crossroads Initiative has been identified and outlined by the Boston Redevelopment Authority as an important priority for Mayor Thomas M. Menino and other private and non-profit partners. The goal of the project is to help link neighborhoods that were previously disconnected by the elevated Central Artery and connect major streets in downtown Boston to the Rose Kennedy Greenway using premium urban design techniques.

The first three Crossroads projects are: Broad Street in the Financial District, Causeway Street at North Station, and Summer and Congress Streets in the Fort Point section of the South Boston Waterfront. Like all of the Crossroads, each of these streets has a unique character to its neighborhood as well as an important place among Downtown streets and thoroughfares.

According to the Boston Redevelopment Authority, Broad Street’s design will create a tree- and café-lined street, building on existing landscaped areas along the street and in the Wharf District area of downtown Boston and the Rose Kennedy Greenway. Broad Street has already begun to serve as a “main street”, along with State Street for the emerging mixed-use Wharf District neighborhood. Design began in the spring of 2006 and was recently finalized. The design will create a pedestrian-friendly environment and improve the function of this important street for multi-modal transportation including improved accessibility and bicycle accommodations including new bike racks. 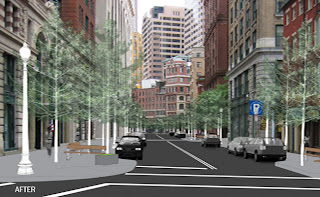 A Better City views the Crossroads Initiative, together with the flourishing of the Greenway and the redevelopment of the South Boston Waterfront, as completing the legacy of the Central Artery/Tunnel project. Together, these projects will help realize the vision of a revitalized and reconnected Downtown Boston, one of the original goals of the Big Dig.     To this end, ABC has organized a Broad Street Abutters Working Group to foster cooperation between the city and Broad Street property owners, managers and tenants.  For more information on this group, visit their website: ABetterCity.org

Broad Street photos used in this post are from Boston Complete Streets.

At Brown & Wagner, LLC, our mission is to help a business find the perfect office space at the most favorable market rate and lease terms.